Last weekend I was at OccupyData and Theorizing the Web, as I mentioned earlier. Nathan Jurgenson and and PJ Reys put on an impressive conference for work about technology and theory (two things which are apparently difficult to talk about at the same time at conferences, apparently). At the same time, the organizers at OccupyData have done a good job coordinating people working on all sorts of different projects – there was a mixture of pitches and continuing work, and there was a little more structure to begin with this time. Two of the more interesting projects that were Data Anywhere [Day 2 post] and the NoFareHikes map that Ingrid Burrington showed us – I especially liked the later because as Christo said, “there’s a media action agenda inherent in project” which makes it great. I’ve been thinking about how a lot of hackathons propose a sort of data solutionism, or a belief that the technology solution is the solution to whatever the issue is. 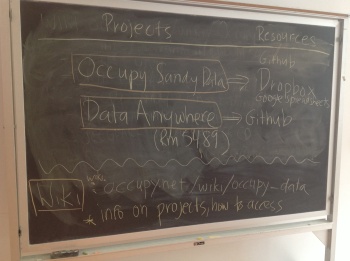 This issue of solutionism comes up in Evgeny Morozov’s new book, which he describes something which “presumes rather than investigates the problem it is trying to solve, reaching for the answer before the questions have been fully asked.” I’d seen David Sasaki examination of Morozov’s idea previously, the issue of how a hackathon is structured to certain aims (as app contest or not) points to how the ultimate goals of the event itself help determine whether or not those project are sustainable. Events that are structured as contests can draw people together for good reasons, but as one OccupyData attendee told me, they don’t always work. Winning things creates an  intentional conflation of civic engagement and trying to make money, and the way they present it to a hacker seems very strange – for some datafests, saving a company money somehow equates to some civically minded, ethical endeavor.

Then again, not all people at a hackathon consider themselves hackers. I met Andrew Schrock at TTW13, and he said he also found this in his work on hackathons. There was a lot of great stuff at the conference – one of the things I found most applicable to my own work was Stéphane Vial’s presentation on “There is no difference between the “real” and the “virtual”: a brief phenomenology of digital revolution” – tech is a extended phenomenotechnique which creates ontophanic shifts, shaking up the technological process and thus shaking our perceptions and feeling in the world.

Vial was attempting to dispel a myth of “two realities,” that there is no difference in the real and virtual as essence, and digital and physical is only separate as different materials. The distinction is between the identity and the self. Later in conversation he used the example of clothes versus the body, where we put on different outfits but always exist in the same skin. Since we then have different identities working through different materials, I wonder if we can conceive of those as a multiplicity of identities (in the rhizomatic sense). It’s an interesting departure from the “second self” sort of digital dualism that the augmented reality folks seem to detest (I really have to catch up on the arguments surrounding this).

Tom Slee also presented an interesting paper on “From Facebook to Banquets: Identity, Institutions, and Uprisings,” and although he insisited that he came in piece with his micro theory, not all were impressed:

My identity can be a math problem! Thanks 4 taking me seriously with ur micro framework!! Smh! #nodads #a1 #TtW13 pic.twitter.com/TU6s5q2LVO

But I did like some of the work he was drawing from, particularly Pol­letta & Jasper’s Collective Identity and Social Movements – they ask a lot of important questions here:

I think Earl & Kimport also hint at these, when they called for more work on the subject in Digitally Enabled Social Change:

If your sense of others’ participation changes, especially when you don’t have a representation of that participation, we might expect that processes driving collective identity would change too. Or collective identity itself might change, emerging from places other than face-to-face interactions, and encouraging different kinds or levels of mobilization than previously studied. (185)

Anyway, there’s a lot of meat from OccupyData and TTW13 that I can now work into my thesis project – grist to the mill, as they say. Of course, if your eyes are open and your brain is on, you can find stuff worth exploring almost anywhere, and a conference is chock full of it – just check out this slide from one of the other panelists.

He left this slide up for what felt like forever.