This weekend I will be presenting for the third year in a row at the annual DePaul Pop Culture Conference, which is A Celebration of Slashers. 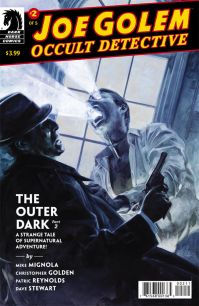 The challenge for me is that  personally, I have never been a huge fan of the slasher genre. I prefer my horror in the form of Cronenberg’s body horor, or the cosmic horror of Lovecraft. Each lends themselves to a certain aesthetic and type of thinking that is widely found in veins of speculative realism and philosophy like object oriented ontology, which turns to “the things themselves” and asks us to deanthropocize our phenomenology, particularly in the anthropocene (or cthuluscene, depending on who you read).

While this is all well and good, it is a bit impersonal. Take for instance, one of my favorite current comic series, Joe Golem. Joe Golem is literally a Golem. He’s not human, but he is desiring to become human, much like the aliens and androids of science fiction. But no monster really wants to be human – it’s inhumanity is what sets it apart. Slashers challenge this aspect of the horror genre because their antagonists largely are (or were) humans.  It is their fractured and wounded humanity that turns them into the monster, a predicament that shows how any of us is capable of terrible, awful violence. It is a relational mode of horror, in which we are searching for a villain to be unmasked, rather than waiting for the rubber monster to just come out of the floor.

My idea is that a philosophy derived from slasher fiction (rather than cosmic or body horror) can tell us more about ethics, gendered and interpersonal violence, than it can about the oddness or weirdness of a non-human phenomenology. I will post the essay here following the conference. If you are in Chicago, be sure to stop by!