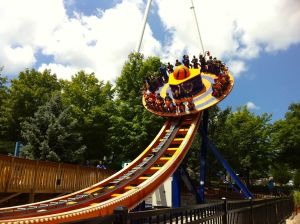 Last Thursday I went with Youth Rights Media to Lake Compounce, an amusement park in Connecticut – we took the youth there to close out the Summer Institute program.

I have never cared for amusement parks. Everything about them bothers me – the giant parking lots, the lines, the prices, food stands. On top of that, I don’t like the rides themselves. All the feelings of anxiety, excitement, and g-force pressure just don’t make me happy! Perhaps this makes me stuffy. I’ve just never been able to understand why so many people enjoy theme parks, and this is similar to my feelings about sports, pop music,  most television and blockbuster films.

Scholars have found rationale for critiquing these institutions in ways that range from “very stuffy fuddy-duddy” to “brilliant and insightful” that appeal to the like minded, but tend to be ignored by the public. I actually used Noam Chomsky‘s argument about sports being “training in irrational jingoism” to bash the athletic programs at the university where I got my BA. But these sorts of arguments stem from the influence of critical theory. Amusement parks themselves seem to be an embodiment of Adorno and Horkheimer’s concept of culture industry, or maybe they just strike me that way as someone who doesn’t like roller coasters.

A few days ago I read William Pannapacker’s controversial piece in The Chronicle of Higher Education, “No DH, No Interview” where cites Laura Mandell’s assertion that digital humanities is a backlash against the prominence of critical theory:

Mandell said DH is partly a turn against the dominance of critical theory, which she called “a PR failure and an intellectual failure: an excessive and unexamined lock-step discipline.” DH provides a rigorous alternative to the seemingly exhausted scholarly approaches of the previous generation. Moreover, DH is a culture of building projects that serve a wide audience rather than—to paraphrase Mandell—engage in knee-jerk denunciations of capitalism while depending on its dwindling largess for our employment.

Now, I’ve seen enough of the internet to know that people in humanities are pissed. Grad students go online to fuss and moan about their dilemma and dissuade others through blogs and terrible cartoons, and their own retroactive self-hatred. This post is not about those people. But it is a defense of critical theory, despite DH’s desperate attempts to resonate in an increasingly mediated cultural environment.  DH seems to be an attempt to augment traditional disciplinary structures with useful and relevant interdisciplinary skills, theory and practice. Ian Bogst also has some interesting insight on this.

Media studies has not coalesced to the point where it has an independent theory – instead it borrows and draws from all sorts of places, including a great deal of work done in the humanities. When I try to find reading material at the Yale Bookstore, I have to look in the literary criticism section. This is because institutions like Yale will never have a media studies program, and instead they’ll be forced to try and incorporate “digital humanities” into the existing structure. The problem is if digital humanities attempts to synthesize various media skills without the critical theory which media studies itself now draws from, it becomes a remediation of the phenomenon which those critiques address. In plain terms, you can’t just tack on media studies to the description of a film studies program and have a “film and media studies program.” Practice is informed by theory, and theory is a bit empty without practice.

After all, where would we be without Buadrillard’s dissection of Disneyland? We may not have ethical theme parks, or a plethora of ethical amusements, but we are at least a little bit less blind than we were before.

…what draws the crowds is undoubtedly much more the social microcosm, the miniaturised and religious revelling in real America, in its delights and drawbacks. You park outside, queue up inside, and are totally abandoned at the exit. In this imaginary world the only phantasmagoria is in the inherent warmth and affection of the crowd, and in that sufficiently excessive number of gadgets used there to specifically maintain the multitudinous affect…

The objective profile of America, then, may be traced throughout Disneyland, even down to the morphology of individuals and the crowd. All its values are exalted here, in miniature and comic strip form. Embalmed and pacified. Whence the possibility of an ideological analysis of Disneyland (L. Marin does it well in Utopies, jeux d’espaces): digest of the American way of life, panegyric to American values, idealised transposition of a contradictory reality. To be sure . But this conceals something else, and that “ideological” blanket exactly serves to cover over a third-order simulation: Disneyland is there to conceal the fact that it is the “real” country, all of “real” America, which is Disneyland (just as prisons are there to conceal the fact that it is the social in its entirety, in its banal omnipresence, which is carceral). Disneyland is presented as imaginary inorder to make us believe that the rest is real, when in fact all of Los Angeles and the America surrounding it are no longer real, but of the order of the hyperreal and of simulation. It is no longer a question of a false representation of reality (ideology), but of concealing the fact that the real is no longer real, and thus of saving the reality principle.

The Disneyland imaginary is neither true nor false; it is a deterrence machine set up in order to rejuvenate in reverse the fiction of the real. Whence the debility, the
infantile degeneration of t his imaginary. It is meant to be an infantile world, in order to make us believe that the adults are elsewhere, in the”real” world, and to conceal the fact that real childishness is everywhere, particularly amongst those adults who go there to act the child in order to foster illusions as to their real childishness.

Moreover, Disneyland is not the only one. Enchanted Village, Magic Mountain, Marine World: Los Angeles is encircled by these “imaginary stations” which feed reality, reality-energy, to a town whose mystery is precisely that it is nothing more than a network of endless, unreal circulation – a town of fabulous proportions, but without space or dimensions. As much as electrical and nuclear power stations, as much as film studios, this town, which is nothing more than an immense script and a perpetual motion picture, needs this old imaginary made up of childhood signals and faked phantasms for its sympathetic nervous system.

Bogst suggests that the humanities want to orient themselves towards the world by adopting the “digital” prefix – but when we go out into the world, we enter into this mediated environment where amusements often dominate our experience. If we’re going to negotiate those experiences, we need the theoretical tools that have already been developed. That’s why media literacy is more than just a pile of user manuals and workshops on how to use cameras and social media. Otherwise, we contribute to Disneyland’s unreality/hyperreality, Debord’s society of spectacle, or whatever you want to call it.